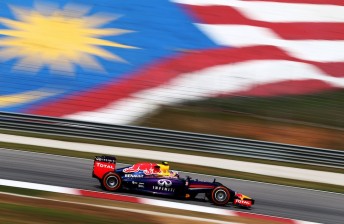 The F1 race director held a media conference at the Sepang circuit where he claimed that the sport’s technical regulations regarding the new 100kg/h fuel flow limit are clear cut.

Whiting also reiterated the rules state that fuel flow readings can can only be measured by a homologated FIA fuel flow sensor.

“Article 5.10 makes it quite clear in my view that the only way the fuel flow will be measured is with the homologated sensor,” said Whiting.

“As you know, Gill is the only sensor that is homologated by the FIA. To me it is perfectly clear.”

Article 5.10.3 of F1’s technical regulations says: “Homologated sensors must be fitted which directly measure the pressure, the temperature and the flow of the fuel supplied to the injectors, these signals must be supplied to the FIA data logger.”

This section of the regulations forms part of Red Bull’s defence for their upcoming appeal hearing in Paris on April 14 over Daniel Ricciardo’s disqualification from second place at the Australian Grand Prix.

The FIA claim the car had consistently surpassed the 100kg/h fuel flow limit, while Red Bull believe according to their equipment, not the FIA sensor, the fuel flow limit was not breached.

Red Bull had asked for further clarification of the rules after Ricciardo suffered another fuel flow sensor failure in Friday’s first practice session at Sepang, which required the Milton Keynes squad to replace the part.

“We had a signal failure on Daniel’s car this morning (Friday) immediately, so we obviously have replaced that for the afternoon’s session and I haven’t had the results of that,” said team boss Christian Horner.

“Hopefully it is reading as per the fuel rail and will behave for the rest of the weekend.

“If it doesn’t, we find ourselves in an awkward situation but it is one where we will try to work with the FIA, but again you are faced with the same dilemma as Australia a couple of weeks ago.”

*Stay with Speedcafe.com for all the latest news from the Malaysian GP this weekend