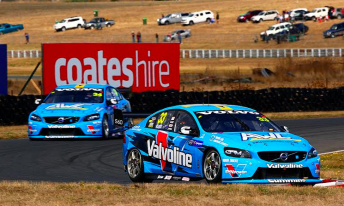 Scott McLaughlin is bracing for a physically demanding weekend at Symmons Plains after both Volvo S60s suffered from power steering “binding” issues throughout Friday practice.

The 20-year-old, who scored Volvo’s first V8 Supercars race victory last time out at Albert Park, recorded the fifth fastest time in the final session, despite the problems.

The team tried a number of solutions throughout the day without success.

McLaughlin says the issues are different to the leak-related steering problems encountered with the cars at the Sydney Motorsport Park test and Adelaide.

“The drama we’ve got here is that the steering binds up and you get to a point where it’s like you’re rolling around in the pits (where the cars are hard to manoeuvre due to the spool),” McLaughlin told Speedcafe.com.

“We tried a lot of things, we had the rack out, put different pumps on it, changed pump valves, everything.

“We’re a bit bamboozled and we might just have to find a way to drive around it.

“It’s quite hard to hold a line and I’ve overtaken a couple of guys into the hairpin today and thought ‘oh, I might struggle to make it around here’,” he added.

“What I’m worried about is that when the revs are really down, like at Turn 1 and the hairpin on the first lap, it’s going to be pretty sketchy.

“Even when I try and pass someone it’s going to be quite hard.”

McLaughlin’s team-mate Robert Dahlgren ended the day at the foot of the timesheeets, albeit just 0.8s from the top spot.

The Swede also suffered from the power steering problem, which greatly added to the challenge of learning the circuit.

“It’s very tough to come to a new track with a car that you can’t really drive properly,” he said.

“I said to Scotty that it was the best forearm workout session I’ve ever done!

“It’s a challenge and if I do well after this, it’ll be very good.”

Starting with this weekend, the majority of events will have just half of the practice time originally schedule, with the cuts aimed at saving running costs for the teams.

“It definitely hurts,” he said.

“In the longer practice sessions you don’t need to hurry so much and get a chance to really think about what you’re doing.

“Even if we just had 10 minutes more in each session it makes a massive difference to how you approach it.”

McLaughlin’s 255km/h best in the final session equalled the fastest Ford and Holden of Mark Winterbottom and Jamie Whincup respectively.

“The car is good,” he said. “Whether it (the steering) gets fixed or not, I think we might be alright.”