Rosberg on top in Sepang practice 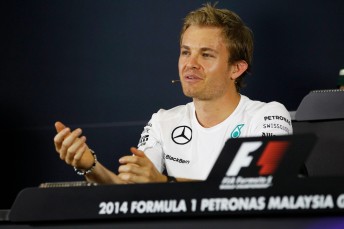 Nico Rosberg set the pace in Friday Practice at Sepang

Nico Rosberg remains the man to beat as his Mercedes topped the times in final Friday Free Practice session for the Malaysian Grand Prix at Sepang.

The Australian Grand Prix winner posted the fastest time of the day with a 1.39.909s effort which was just four hundredths of a second quicker than Ferrari’s Kimi Raikkonen.

Red Bull Racing’s Sebastian Vettel was third fastest with his best time within a tenth of Rosberg’s effort, while team mate Daniel Ricciardo was seventh quickest.

Mercedes continued to hold the edge in terms of performance, highlighted by Lewis Hamilton topping the times in Free Practice 1. However the Brackley team’s advantage over the rest has been significantly cut.

Ferrari appear to have made up the most ground on the Silver Arrows with both Raikkonen and Fernando Alonso posting times just a tenth adrift of Rosberg. Double world champion Alonso finished fifth overall.

Felipe Massa and Valtteri Bottas once again showed Williams will be challenging the top order by producing solid race runs. The pair were sixth and ninth respectively.

Meanwhile McLaren, who were testing several updates on their MP4-29, struggled for outright pace. Jenson Button was sixth tenths adrift in eighth while Kevin Magnussen could only set a time good enough for 12th position.

The dry and dusty track played havoc with the drivers in free practice with several of the field struggling to slow their cars down in the braking zones resulting in spins.

Marussia’s Max Chilton was the first to be caught out in FP2 at turn 3, while Jean-Eric Vergne lost control of his Toro Rosso at the final corner.

On the whole reliability had improved since Australia although Lotus continued to struggle with drivers Pastor Maldonado and Romain Grosjean both failing to post a time during FP1.

The cars returned to the track in the second free practice session but an issue for Maldonado forced him back tot he pits.

He was followed shortly after by Grosjean, when his E22 was jammed in second gear. The Frenchman did return to the track later in the session only to stop out on circuit.