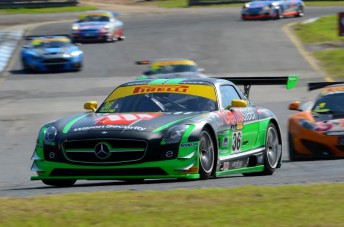 Muscat immediately sprang to the top in his competitive debut for Erebus GT in the Mercedes AMG SLS GT3 by topping the third practice session in the 24-car field.

He clocked 1:09.7504s, just under a second quicker than Justin McMillan (Lamborghini Gallardo) with James Koundouris third fastest in a Porsche GT3-R.

“It’s a very different thing to drive compared to the Porsche I was racing last year,” Muscat said.

“It’s taking time to learn how to drive this car and adapt to things like traction control and ABS, as well as the fact the engine is at the front rather than the rear, but it’s been great.

“Working with guys like (Erebus team manager) Barry Ryan and Jack LeBrocq (who raced with the team at the recent Bathurst 12-hour), has made it easier. It’s a great process but you never stop learning.”

Opening round winner Fraser Ross was dominant across the two practice sessions, ending up 0.7s quicker than John Goodacre and John Karytinos.