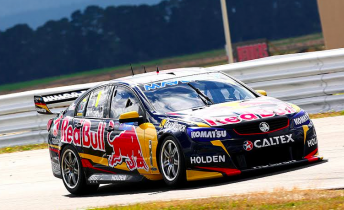 Red Bull Racing Australia completed its sweep of the Friday sessions at Symmons Plains with Jamie Whincup leading a team one-two in Practice 3.

The five-time champion set the best time of the session with just under four minutes remaining.

Lowndes had appeared set to eclipse Whincup in the final moments of Practice 3 before running off at Turn 6.

Chaz Mostert sat atop the Practice 3 order for much of the 20 minutes before falling to third in the closing stages.

The V8 Supercars will return to the track for back-to-back 10 minute qualifying sessions from 1130 tomorrow morning.