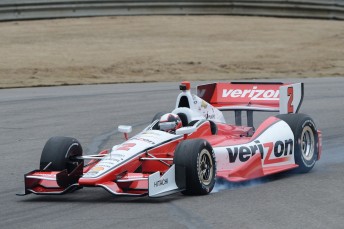 Juan Montoya locks up during testing at Barber Motorsports Park

Team Penske’s new recruit Juan Montoya would be expected to be regularly challenging for podiums by May, according to the squad’s president.

Montoya returns to the North American single-seater class behind the wheel of a Penske Chevrolet-powered Dallara when the IndyCar season kicks off in St Petersburg, Florida, this weekend.

The president of the iconic Charlotte-based squad, Tim Cindric told Speedcafe.com he expects Montoya to rediscover his open-wheel touch in rapid time after some encouraging pre-season testing.

At the last round of tests, Montoya took a big step alongside his new team-mates Will Power and Helio Castroneves.

“I felt like that most of the pre-season testing he has continued to take maybe a tenth or two off,” Cindric explained.

“And prior to the Barber tests at most of the tracks we tested at I think it was like .5s differential and at Barber he like cut that differential in half.

Cindric says the 1999 CART champion and 2000 Indianapolis 500 winner needs to ease back into the harness and regain his confidence in the single-seaters, particularly in qualifying.

“It’s just the lack of experience and the lack of confidence and getting that lap done at the optimum time is something he needs to sort now.

“That’s in terms of qualifying. In terms of the racing I think there is going to be a couple of things that he is going to have to get accustomed to.

“I would hope that by the time we got to Indianapolis (road course even before the Indy 500) that he should be challenging for podiums on a regular basis. That is what our goal is.”

*Stay with Speedcafe.com for the latest on IndyCar’s opening round in Florida this weekend