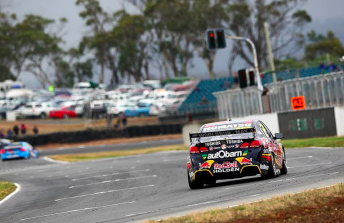 Craig Lowndes set the fastest time in the opening session

The Red Bull Racing Australia Holdens bookended the field in opening practice for the Tyrepower Tasmania 400 at Symmons Plains.

Michael Caruso was the fastest of the Nissans in eighth, with Will Davison leading the Erebus Mercedes effort in 18th and Scott McLaughlin a low-key 21st in the top Volvo.

Team-mate and circuit rookie Robert Dahlgren improved steadily throughout the session, ending up just 1.4s from the pace in 24th.

A damp track from morning rain proved little hindrance to quick times for the front-runners, with Garth Tander the first to get within a second of the practice lap record at the halfway mark.