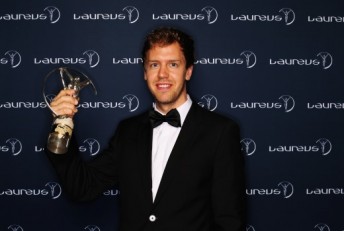 Vettel with his World Sportsman of the year trophy

The awards, this year held in Kuala Lumpur, brought together the best athletes and teams from across the world of sport in a single event. This year marks the 15th year of the Awards which celebrates the most remarkable men and women from the world of sport along with the greatest sporting achievements fans have marvelled at throughout the year. 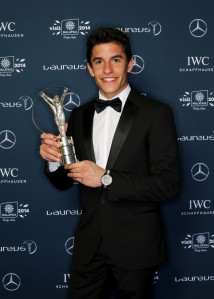 Márquez is the Breakthough Athlete

The members of the Laureus World Sports Academy then vote by secret ballot to select the Award winners in all seven categories.

Vettel was recognised following his fourth straight Formula One World Championship, joining legends Juan Manuel Fangio, Michael Schumacher and Alain Prost, who all won at least four times. At just 26 years and 116 days, Vettel is the youngest ever four-time champion. In 2013 he won 13 Grand Prix, including a record nine straight victories.

“If I’ve learned anything tonight, surely it’s the fact that sport can be a very, very big inspiration,” said Vettel upon accepting the award.

“I’ve come here and seen many heroes of mine… this (award) is very inspirational, very special.”

“It’s a special experience for me to be here, at just 21 years of age, with so many sporting legends,” said Marques.

“This is one of the most important awards I have ever won. I also want to thank everyone who has helped me in my career and to win the title.”

Other winners on the night were:

Sportswoman of the Year: US swimmer Missy Franklin who at 18 years of age won four gold medals at the London Olympics and continues to refuse prize money and endorsements so that she can maintain her amateur status in college.

Team of the Year: Bayern Munich which became the first club to complete the treble of UEFA Champions League (their fifth win), Bundesliga and German Cup.

Comeback of the Year: Rafael Nadal returned to tennis after a seven month absence with a knee injury to produce one of his finest years. Winning the French Open for a record eighth time and the US Open giving him 13 Grand Slam titals.

Action Sportsperson of the Year: BMX rider Jamie Bestwick (UK) who became the only athlete in X Games history to win eight straight gold medals, two more than legends such as Tony Hawk and Shaun White.

Sport for Good: Magic Bus (India) Charity. The great success achieved by Magic Bus, an innovative project that is transforming the lives of hundreds of thousands of underprivileged children in India. Based in Mumbai it aims to take children out of poverty through a programme of mentoring and coaching. Since 2001, the Magic Bus programme has grown to embrace over 300,000 children and aims to reach out to one million children each week by 2016.

Sportsperson with a disability: France’s Marie Bochet, who suffers from agenesis of the left arm, dominated her sport in 2013 becoming the first athlete to complete a Grand Slam of all five events at one Alpine Skiing World Championships – and she achieved this at the age of just 19.

Spirit of Sport Award: Afghanistani Cricket Team, which despite being a war torn nation qualified for the Cricket World Cup for the first time.