Peugeot to return to Dakar after 25 year hiatus 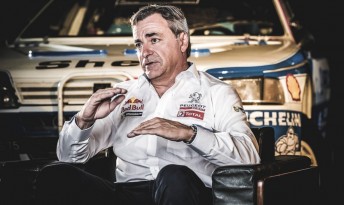 French car maker Peugeot will return to the revered Dakar rally for the first time in 25 years in 2015.

Peugeot has signed world rallying legend Carlos Sainz and Cyril Despres to lead the quest back into the world’s longest and most demanding cross-country assault that encompasses 10,000km.

The decision to return comes after Peugeot’s epic project which smashed the Pikes Peak Hillclimb record with the world’s most successful rally driver, Sebastien Loeb at the wheel.

The Dakar assault will be in conjunction with Red Bull and Total, the same partners involved with the Pikes Peak record last year.

Peugeot won Dakar four years straight from 1987 to 1990 initially with the 205 T16 Grand Raid and then the 405 T16 Grand Raid when the event was held in Africa long before moving to its new home of South America.

More details about the Dakar car will be unveiled at the Beijing Motor Show on April 20.

“I have often competed against Peugeot Sport in the past and I have known for years just how passionate it is about motorsport,” the Spaniard said.

“I also know that when they decide on a program, they put everything into it.

“Given how much I love the Dakar, it was too good a proposal to resist when Peugeot asked me to be part of its line-up for its comeback to this unique adventure.”

Peugeot says it has chosen its vehicle, the 2008, to compete at Dakar as it has relevance in many international markets.

““The 2008 conveys a strong image on every continent. It is our latest crossover and is proving a big hit in Europe, ahead of its launches in China and Latin America in 2015. The 2008 DKR stood out as the obvious choice,” Peugeot chief executive, Maxime Picat, said.