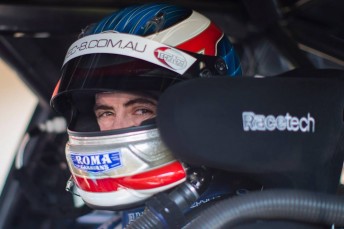 Alex Davison’s return to the V8 Supercars Championship in this year’s Pirtek Enduro Cup is set to take place alongside brother Will at Erebus Motorsport.

Alex is without a full-time drive this year after a trying 2013 season in Charlie Schwerkolt’s fourth entry at Ford Performance Racing.

The 34-year-old is hoping that a strong showing in this year’s Sandown, Bathurst and Gold Coast races will help springboard him back into a seat next season.

Although unable to comment on the yet-to-be-announced endurance drive, a deal to join the customer Mercedes-AMG outfit is understood be in place.

The brothers were full-time team-mates in the Ford Performance Racing stable last year, but are yet to tackle a V8 Supercars race as a pairing.

Jumping into an Erebus Mercedes will be a homecoming of sorts for Alex, who drove three full-time seasons for the squad under its previous guise of Stone Brothers Racing from 2009.

The former Carrera Cup champion says he’s just looking forward to getting back to competition in September following his downtime.

“It’s frustrating not being in a car,” he told Speedcafe.com.

“It’s the first time in my career since I was 11 that I haven’t been racing something full-time.

“It’s difficult on a number of fronts, but it is what it is.”

Davison is not expecting to attend any V8 Supercars events prior to Sandown following a recent V8 Supercars decision to axe co-driver practice sessions at Winton, Ipswich and Sydney Motorsport Park.

While working on the possibility of re-appearing in the Carrera Cup Australia later this season, Davison makes no bones about his intention to return to V8 Supercars full-time in 2015.

“If I genuinely felt I didn’t belong in V8 Supercars and wasn’t up to the task then I’d walk away, but I know that’s not the case,” he said.

“I still want to get the most out of myself. I want to be in the position where I have some continuity and consistency.

“On a number of occasions I’ve got to the point where we can run very competitively, but I haven’t been able to do that over an extended period.

“That can come down to a whole lot of factors, but the main one is just having good continuity in your engineering relationships.

“It was disappointing last year that we had a big improvement in our performance when I had a change of engineers (for the penultimate round at Phillip Island, where Dave Patterson replaced the Dick Johnson Racing-bound Campbell Little).

“Both David and I knew that at the end of the year we were only scratching the surface, there was a lot of potential there.

“That was frustrating and I want to get into a position where I can fulfil the potential I have.”

Davison stressed, however, that he won’t be letting his quest for a full-time return cloud his judgement in the endurance events.

“Really my focus is on just doing the best job I can as an enduro driver, and if you do well then that proves something in itself,” he said.

“I think a lot of guys, young guys in particular, go in with the wrong mindset. They want to be in the main game and in doing so try way too hard.

“Whenever I’ve been a co-driver, I just try and do the job. That’s to be as quick as you can, but also keep in the back of your mind that it’s not your job to take risks like it is for the main driver.”