Michael Caruso’s first season as a factory driver in the V8 Supercars Championship was undoubtedly a rocky one.

This year’s season-opener in Adelaide was also far from smooth sailing; a clash with Jamie Whincup late in Sunday’s finale curtailing a top 10 run.

Pole position and a weekend podium at Albert Park well and truly proved, however, that Caruso will be one to keep an eye on during the year.

Speedcafe.com’s Stefan Bartholomaeus spoke with the 30-year-old about his past, present and future with the Nissan outfit.

SPEEDCAFE: Michael, looking at the first two events of the year, you’ve experienced a bit of everything really. What have you made of it?

MICHAEL CARUSO: I’m pretty happy with how it has all kicked off to be honest. Ultimately, the speed we had in Adelaide wasn’t reflected in our results.

Outside of that the test day (at Sydney Motorsport Park in February) went well, given how the day went weather wise.

It was good to get the great results we had at the Grand Prix and hopefully we can carry that now throughout the year.

SPEEDCAFE: Albert Park would have finally given you a good feel of the new aero package, given that Sydney was wet and there’s not much high-speed stuff in Adelaide. Is it much different to drive? 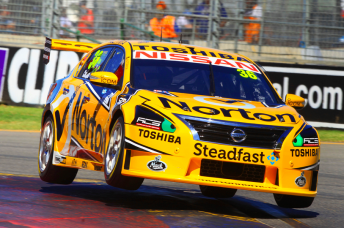 Caruso in action at the Clipsal 500

CARUSO: It is a little bit. I think ultimately it’s much the same race car. The things that are different have probably not made it any better for me to drive but that’s probably just a matter of needing to adjust the set-up a little bit.

There’s still a little bit of work to do with that because we haven’t done that many miles yet, but hopefully we can tune those little bits out.

Everyone in the field is going to have those problems. We’ve just got to do the best we can and hopefully on each given day we’re up the pointier end.

SPEEDCAFE: Is it fair to say that, while the qualifying speed can obviously be very good, it’s not quite there as a race-able car yet, due to a power deficit?

CARUSO: Yeah, definitely. I think our speed all weekend was as good as what we had in qualifying, it was just the way the start of the races were there, it didn’t make it easy. The first 400 metres (after the rolling starts) weren’t good for us.

But it’s pretty encouraging that we have made a step forward from last year and by the sounds of things, the next engine upgrade will put us right there in the mix in terms of straightline speed, which will make it easier for us to race against everyone.

Tracks like Tassie and Darwin have long straights, but at places like Winton, we’ll need to make hay while the sun shines. By the time we get into the enduros, hopefully that engine speed comes along and we’re in a position with the car that we can win races.

SPEEDCAFE: How hard was last year for you? You went in knowing that there was a lot of work to do, but even in the back half of the season a lot of the (mechanical) problems seemed to be on your car. That must have been hard to deal with?

CARUSO: Yeah, it was. The hardest thing I found was that, once we got on top of setting the car up, we did have those mechanical failures when we sort of had a car that was well and truly inside the top 10.

The ultimate aim for last year, which I always had in my mind when I first signed up with the team, was to get an understanding of the new team and new car and plan towards this year.

That’s something that’s hard to see when you’re not within the race team. The good thing is we’ve started on the right foot now and we’re showing that everything we learnt last year is working out for the best.

SPEEDCAFE: There was obviously some shuffling to the team’s engineering structure over the off-season. How important was it to you for Steve (Todkill, race engineer) to stay on your car?

CARUSO: Me and Steve, it was a part of the whole package to move over (from Garry Rogers Motorsport) to Nissan. We get along quite so there was certainly no reason to change that up.

We seem to be getting the most out of our equipment at the moment, which I think again is key to that relationship. It’s always good when you feel like the relationship works really easily. 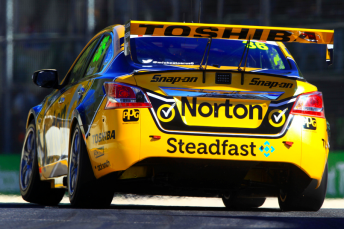 He knows me quite well now over the years we’ve worked together. That was a real benefit to us last year when we were getting to grips with the car.

SPEEDCAFE: Now that the whole base performance level of the team has risen, does it become any more competitive within the team, in terms of the four drivers and respective engineers?

CARUSO: We haven’t really seen that, to be honest. Particularly our engineers all seem to get along quite well, which is quite important.

There’s always going to be a little bit of competition, and I think that’s important as well to drive everybody forward and want to be the best.

With team-mates that have all won races and, in the case of Todd and Rick won Bathurst, I think we’ve got a good balance in the team.

Hopefully that helps us as a group develop the cars and get us to the point that we’re winning races.

SPEEDCAFE: Was there much said on Sunday afternoon at Albert Park after the friendly fire (Caruso and Rick Kelly collided in an incident that also took out James Moffat’s Altima)?

CARUSO: No, it was quite good actually. I had a chat with Rick and his engineer and they were quite good. They were pleased that we got a podium out of it.

There was no hard feelings, and after we all saw the footage we understood exactly what had happened.

It’s bound to happen when you have four cars that are quite competitive. The chances of racing against each other are higher than when you have two cars.

SPEEDCAFE: Outside of the car, moving from what Garry’s was then to a factory team in Nissan, there’s a lot of different requirements off the track. Last weekend your media manager had you cooking pancakes on breakfast television! How have you found that side of it?

CARUSO: It’s certainly a different commercial approach, which I’ve enjoyed. That was one part of moving to the team, to make my profile bigger and start to do things.

All the TV stuff I’m doing is a part of that as well. I’m enjoying all that off-track stuff at the moment. It seems to be a really good balance between racing and the PR side.

It’s different and every team has their own pros and cons. Being with Garry helped me develop as a driver.

They (GRM) are working really well at the moment. I don’t think there’s a right or a wrong anywhere in the field to be honest.

SPEEDCAFE: What have you made of the Volvo? You know all those guys at GRM better than most.

CARUSO: I think that, the one thing that was pretty prominent while I was at Garry’s was that the team is quite good.

They always did good pitstops and the base of the team was quite strong. The only thing they really lacked was a good chassis.

Now that they have that and have Polestar with the engine as well, it’s no surprise that they’re very strong.

You only have to look back at every year at Bathurst. They always seem to put together a great package and run competitively.

It shows that once you get a good package and good group together, anyone can win on the day.

SPEEDCAFE: So for you, knowing what you’ve got now and what’s coming development wise, what will you have to achieve this year in order to be content at the end of the year?

CARUSO: I think that we do need to be challenging for podiums. Maybe not every single weekend, but that’s the aim for the team.

If we can put ourselves in that position, then a top 10 in the championship is definitely realistic.

We still are having our little dramas here and there with engines and what-have-you, but I think it’s definitely achievable.

If we can get that speed out of the engine, then I think come enduro season we should be able to put together a great package and really challenge across those three events.