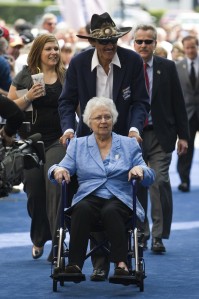 Lynda Gayle Owens Petty has died at her home in North Carolina after a battle with cancer that lasted for several years.

Married to Richard Petty, the most decorated driver in NASCAR history, for more than 50 years ‘Mrs Lynda’ as she was universally called, devoted much of her life to community work and charity.

She was a Red Cross volunteer, a school volunteer, the president of the athletic booster club and a Girl and Boy Scout leader in a life enriched with achievement.

Mrs Lynda proved a tower of strength both in and out of the public glare through the rollercoaster ride which her husband, the King, rode through his remarkable stock car career.

A private memorial service for family and friends will be held at Reverie Place in Randleman, North Carolina.

A flood of tributes began pouring in from the NASCAR community including one from her grandson Austin Petty who runs the Victory Junction Gang Camp charity for children with chronic medical conditions.

The camp was set up a few years following the death of Austin’s brother Adam Petty who was killed in 2000.

“We have lost my grandmother, but my family and our Victory Junction family are grateful to have had her love and wisdom for so many years,” Austin said.
“It was no secret that she was the cornerstone of the Petty family; a woman of humility and extraordinary strength.

“ While we mourn her death, we also celebrate her life and the profound impact she had on those who knew her.

“On behalf of the France Family and everyone at NASCAR, I want to offer sincere condolences to the Petty Family regarding the loss of their beloved matriarch, Lynda Petty,” said Brian France, NASCAR Chairman and CEO.

“Through the years, Lynda became an integral part of the NASCAR landscape.

“We have lost a true friend, who will be missed each and every day. Our thoughts and prayers will be with the Pettys throughout this difficult time.”

Edsel B. Ford II, member, Board of Directors, Ford Motor Company said: “Our sympathies go out to Richard and the entire Petty family today on the passing of Lynda.

“She has stood by Richard’s side throughout these many years, and she will be missed by many in the sport.”

Jamie Allison, director, Ford Racing: “From all the Ford fans around the world, our thoughts and prayers are with Richard, and all the Petty family today with this sad news.

“Lynda was a very important part of the Petty legacy in the sport.

“We know this is a difficult day for both the family, and all the team members at RPM, and our hearts go out to them.”

Richard Petty Motorsports, which runs Ford Fusions for Marcos Ambrose and Aric Almirola, is expected to pay tribute to the matriarch of the Petty family at the Martinsville round of the NASCAR Sprint Cup Championship this weekend.

Speedcafe.com offers its condolences to the Petty family at this difficult time.

*For comprehensive NASCAR coverage from the latest round at Martinsville this weekend, stayed tuned to Speedcafe.com