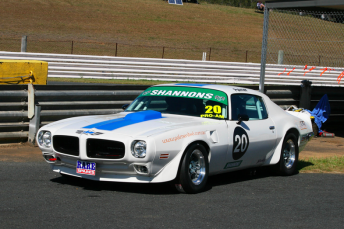 Queenslander Ian Palmer will become the first man to race a Pontiac Firebird in the Touring Car Masters when the series continues at Winton next month.

The Firebird will be one of three new cars at Winton, with a Chev Monza and a Ford Falcon set to be debuted by Tony Hunter and Bruce McLeod respectively.

“I didn’t realise the enormity of the kind of build required for TCM cars,” said Palmer.

“Mainly, I did it because there have been no other Pontiac’s out there so it’s something different.

“You’ve got plenty of Mustangs, Monaro’s and the like out there so it’s good to have something new… and it’s a cool looking car!

“Some people have said, I think somewhat unkindly, that it’s basically a Camaro with a different nose so on that basis it should make a good race car!”

Ford Mustang driver John Bowe leads the standings courtesy of his win at the opening round of the season in Adelaide earlier this month.