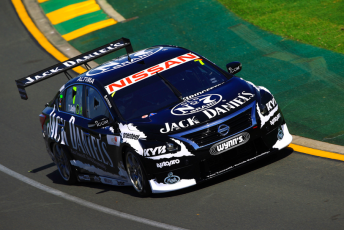 Nissan Australia’s incoming CEO, Richard Emery, will be formally introduced to the V8 Supercars fraternity this weekend in Tasmania amid a restructure of the company’s local marketing operations.

Nissan’s motorsport manager, Jeff Fisher, has already been moved on from the company as part of the shake-up.

Based out of Nissan Australia’s offices in Dandenong, Victoria, Fisher was promoted from Nissan’s corporate communications department to the newly created role of motorsport manager ahead of the company’s move into V8 Supercars for 2013.

He is credited with playing a significant part in Nissan’s backing of the formerly Holden Kelly Racing outfit.

“This personnel change is part of a restructure within Nissan’s local marketing operations, the results of which will see greater emphasis on specific local marketing investments such as motorsport,” explained Nissan in a statement.

“The structure for motorsport within the Nissan Australia marketing team is in the process of being finalised and an announcement will be made in the near future.”

Holden’s V8 Supercars efforts have, by contrast, long been represented by its motorsport and sponsorships manager Simon McNamara.

Nissan initially used its V8 Supercars foray to introduce the mid-size Altima bodyshape and nameplate to the Australian market in the lead-up to its showroom introduction last November.

Despite the management change, it’s expected that Nissan Australia, which now includes a local version of the global GT Academy in its motorsport program, will continue to use the V8 Supercars effort as a key part of its marketing platform.

Most recently the general manager of passenger car sales at Mercedes-Benz Asia-Pacific, incoming CEO Emery is a known motorsport enthusiast.

He previously headed up Mitsubishi’s rallying and Ralliart performance programs during his time with Mitsubishi Motors Australia.

Emery attended both the Clipsal 500 and Australian Grand Prix as a low-key guest of Nissan, but will be making his first public appearance for the company at Symmons Plains.

“Richard Emery’s first official day as our managing director and CEO is on the 1st of April, but we wanted to ensure that he was exposed to the motorsport media, as well as the team and V8 Supercars officials at the earliest possible time,” explained a Nissan spokesman.

“He will have other business to attend to there also, but his primary reason will be to attend Symmons Plains.

“We wanted to get him in front of the relevant people in V8 Supercars at the earliest possible opportunity.”

Nissan’s fortunes in the Australian new car market have flagged over the last 12 months, with its January and February sales figures both falling more than 40 percent year-on-year.

Its racing effort, however, has shown starkly improved form over the opening two events of 2014 following off-season tweaks to the Altima’s aerodynamic package.

Rick Kelly sits fourth in the points standings following his strong turn of speed in Adelaide, while Michael Caruso took the squad’s first pole position last time out at the non-championship AGP meeting.