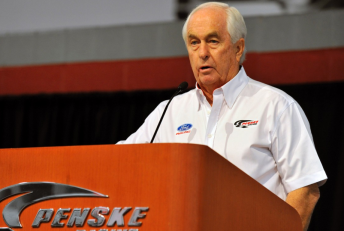 Team Penske expects its level of involvement in the 2015 V8 Supercars Championship to become clearer after May’s Indianapolis 500.

Tim Cindric, president of the powerful Penske Racing operation, remains in ongoing discussions with potential partners for an attack on the Australian championship.

The Penske empire is currently involved in V8 Supercars through its trucking divisions, suppling Ford Performance Racing and Triple Eight with its Western Star and MAN brands respectively.

Penske has been most strongly linked to direct team involvement through Dick Johnson Racing after visiting the team’s headquarters last year.

Such a move would most likely require a major investment in next-generation engine and bodywork programs from Ford, however, which Cindric admits is looking increasingly unlikely.

Ford, whose global motorsport manager Jamie Allison joined Cindric at last year’s Sydney V8 Supercars event, is yet to commit to V8 Supercars beyond its current sponsorship of Ford Performance Racing, which was the subject of a one-year renewal for 2014.

“I think it is a matter of time whether 2015 is more sponsor driven or that there is some relationship from our racing team’s perspective,” Cindric told Speedcafe.com.

“If Ford were keen to do that (back a Penske V8 Supercars project), I think it would make things a lot easier to understand, but that doesn’t seem like a real avenue for us.”

Although his team’s NASCAR efforts are currently with the Blue Oval, Roger Penske enjoys strong relationships with several manufacturers through his extensive network of car dealerships in the United States.

A timeline on a call about Penske’s V8 involvement will almost certainly come after the Indy 500 with Cindric and Roger Penske set to include Australia in their strategy discussions.

“It is a little busy until May is over,” Cindric explained.

“Running three cars (for Will Power, Helio Castroneves and Juan Montoya) at Indianapolis is demanding but at the same time I get to spend a lot of quality time with Roger during the month of May.

Cindric stressed that if Penske was to push the button on entering V8s it would have to follow the tried and tested formula the Charlotte, North Carolina, operation has followed since the 1960s.

“If we were to become involved from a team perspective I would want it to look and feel like us,” Cindric said.

“Building up a team and a winning team is going to take some time but hopefully we will get that opportunity.”