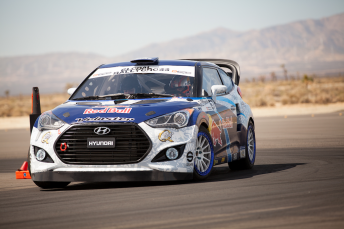 Established separately to the FIA-sanctioned World Rallycross Championship, the GRC which was formed in 2011, will use dirt and tarmac circuits with nine of the events based in the United States.

The other Veloster will be campaigned by the thoroughly experienced Rhys Millen, the son of five-times Pikes Peak champion Rod Millen who scored three of his wins in a Toyota Celica and two in a Toyota Tacoma.

Rhys Millen formed an association with Hyundai in 2009 when he set what was then a rear-wheel-drive record at Pikes Peak in a Genesis Coupe.

In a double breakthrough for woman in the GRC, Gilmour will be joined by Australia’s Sarah Burgess at the popular X-Games at Austin, Texas, in June.

The announcements were made just ahead of a pre-season demonstration day for the GRC at Lake Elsinore in California.

“I have to keep pinching myself to remind myself it isn’t a dream.

“I am so excited about the opportunity and the new challenge of learning Rallycross. It’s a true privilege to be the first female driver in the GRC series.”

Gilmour will be seen first in action at the Caribbean island of Barbados as part of the BBC Top Gear Festival May 17.

“I have never raced in Rallycross but I have had experience with high horsepower cars with my current Suzuki Swift Maxi rally car and driving Possum Bourne’s former hillclimb World Rally car.”

“I have also done some endurance circuit racing in a left-hand-drive Porsche GT3, but no doubt the GRC will present some exciting new challenges to test my driving skills.”

Along with her 10-race international schedule, Gilmour is still looking forward to competing in the six-round New Zealand Rally Championship in her home-built Suzuki Swift Maxi.