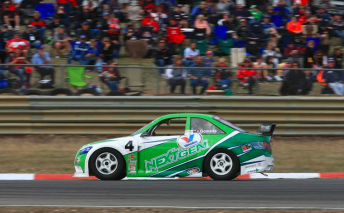 Adam Gowans will return to the ARC at Symmons Plains

Former Aussie Racing Car Series winner Adam Gowans will make a one-off return to the category at his local event in Tasmania this weekend.

Gowans won the Symmons Plains ARC round last year before making a mid-season switch to the Carrera Cup with Team Kiwi Racing.

The Aussie Racing Cars join local HQ Holden and Sports GT classes as the support acts to the V8 Supercars in Tasmania.

New South Welshmen Trent Young leads the ARC standings by just a single point over Brendon Pingel after the season-opener in Adelaide earlier this month.

Gowans, who will step back into the Valvoline-backed Toyota Aurion that he previously campaigned in the class, is expected to mix it with the title contenders.

“It definitely wont be easy, it never is,” said Gowans, whose last track time came as part of the MARC Focus team at the Bathurst 12 Hour.

“The cars are different to drive and I think Ill need all of the practice sessions to figure it out again, and maybe part of Race 1 and 2.

“Having a break is one thing, but driving vastly different styles of cars is something Ill have to adjust back from.”

Gowans is hoping to return to the Carrera Cup for its two-driver Phillip Island event in May, having won last year’s Rennsport contest with TKR alongside regular pilot Shae Davies.

Gowans subsequently took over the entry from Davies for the Winton and Bathurst events, but could not put together a deal to return to the championship in 2014.

“It was very disappointing, especially after not only gaining some good experience in the class but also posting some decent results on limited testing,” he said of missing out on a full-time Carrera Cup seat.

“Out-qualifying Luffy at Winton and finishing 3rd outright on debut was a buzz.

“There was definitely some potential, but like anything, it takes time and laps for that to be realised to its full, especially given the level of competition.”