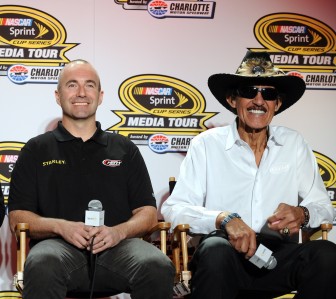 Marcos Ambrose with the king – his NASCAR boss Richard Petty

Marcos Ambrose ditched Australia and V8 Supercars at the end of 2005 to pursue his NASCAR dream.

Making the decision to abandon a category, where he won back-to-back titles in 2003-2004 before being stopped from netting a third by his then Stone Brothers team-mate Russell Ingall, was a bold move.

After putting in the hard yards in the NASCAR Truck Series in 2006, he graduated to the second tier Nationwide category in 2007 before gaining a break in the top stock car series in 2008.

While still doing the second tier category, the first of Ambrose’s four wins in the Nationwide Series came at Watkins Glen in 2008.

Originally with Wood Brothers/JTG, Ambrose then raced for Brad Daugherty in 2009 when the team split in two.

After doing the final four Sprint Cup races in 2008 in the #47 Toyota, Ambrose continued in the same car the following year.

The 2010 season saw Ambrose at the crossroads with his progress stunted and his performance decimated by a mix of crashes and engine problems.

Ambrose switched to Richard Petty Motorsports in 2011 when he broke through for his maiden win in the Sprint Cup at Watkins Glen, an effort he repeated the following year which stand as his only two success in the main game.

Still desperately searching for his initial win on an oval course, Ambrose has a deal until the end of the year.

Ambrose is on record as saying if he has another year like 2013 when he finished 22nd, his second worst Sprint Cup effort since 2010 (26th), he will need to have a good, hard look at what he’s doing.

There has been overtures made for a possible avenue for him to return to Australia through the huge Team Penske operation which is considering an entry in V8 Supercars possibly in 2015.

A return to V8s by Ambrose would certainly be a boon for the series on many levels, not the least if its with Team Penske.

Have your say on should Ambrose return to where he made an indelible mark on the poll below.

Next Story Percat ready for Tassie baptism in new livery