Podium for Winterbottom in Brazil Third place for Winterbottom at Interlagos

Mark Winterbottom has come through tricky conditions to finish third on his debut in the Brazilian Stock Car series at the Interlagos Circuit in São Paulo.

The race was won by 18-year-old by Felipe Fraga who was teamed with Rodrigo Sperafico. Valdeno Brito and versatile Dutchman Jeroen Bleekemolen finished second.

Teamed with Sergio Jiminez, Winterbottom brought the Peugeot 408-bodied car across the line fourth, but a post-race inquiry has elevated them to third.

Jimenez started the 50-minute race from seventh position and held his own on the wet track. Winterbottom took over on the 14th lap and moved up the order as the rain eased. 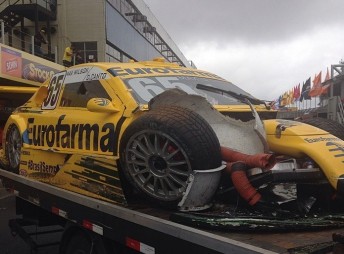 Early exit for the Wilson/Canto car

He crossed the line right on the rear bumper of Mauro Giallombardo. After the race officials deemed that the third place car’s main driver, Marcos Gomes, had done too many laps (maximum 16) and that car was excluded from the results. The team has appealed the decision.

“The race was wet so conditions were tricky,” said Winterbottom.

“Did the fastest time on my last lap and was just one-tenth behind as we crossed the line. I thought that was pretty good and then got the news that the car in front had been disqualified for a technical breach.

“I understand they are appealing and no matter what it has been a good result and great experience racing in Brazil.”

Fellow Australian and FPR stable mate Dean Canto didn’t get the chance to jump in the driver’s seat after lead driver Max Wilson was out of the race on just the third lap. The former V8 Supercar driver was caught-up in an accident involving Rubens Barrichello, Denis Navarro, and Victor Genz which forced the car’s retirement and placed them in 29th.

“More bad luck for me. Max got caught up in a crash on lap 3 and our day is done. No racing for me this time,” said Canto via Twitter.