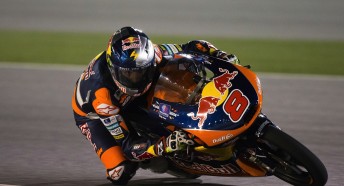 Jack Miller on his way to victory in Qatar

The 19-year-old, competing in his third season in the class, made the most of a mistake from leader Alex Marquez on the final lap to record his first career Grand Prix victory.

Miller made a strong start from third on the grid to slot into second behind Marquez, brother of MotoGP world champion Marc Marquez, after pole man Alex Rins fluffed his getaway.

The Townsville-born rider became involved in a classic battle for the lead with Marquez for the entire race until the Spaniard made an error on the final lap.

The mistake was all Miller needed to move into the lead and from there he guided his Red Bull KTM to the chequered flag to take the victory by two tenths of a second. Efren Vazquez finished in third on the SaxoPrint-RTG Honda.

”Without a doubt , I could not have ask for anything better from today: My first race with the team, my first podium and my first win -unbelievable,” said Miller.

“It was a very good race and a great way to start the season. There are still many Grands Prix ahead and have much to learn, but for today I am very happy. Winning a race is an amazing feeling, so I hope I can repeat the feeling more times.

“Thanks to the whole team for the work we’ve done together so far.”

As a result of the win, Miller will top the standings when the championship moves to America for round two at the Circuit of the Americas on April 13.