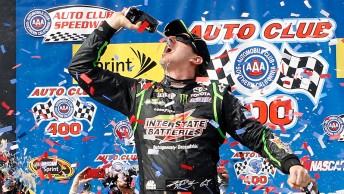 Kyle Busch has won his second-straight Auto Club 400 at Fontana in California after a race dominated by tyre issues.

“I went into Turn 1 thinking I’d run the middle, Tony (Stewart) started sliding off the bottom, so I cut my car to the left, drove underneath him and was able to keep Kyle Larson behind me,” said Kyle Busch

“What a shoe that kid is. If he drove it further than I did, Jesus must have told him to stop.

“What an awesome race this track produced two days in a row. I can’t believe it. Thank the Lord for getting us locked in the Chase.”

Larson was trailed by Kurt Busch, Matt Kenseth and Tony Stewart to complete the top-five.

The major talking point was a range of tyre failures which started with Kevin Harvick. The Stewart-Haas driver recovered to make it back into the top three later in the race, but had another left rear go down with 62 laps remaining. He finished 36th.

Before the race even hit 50 laps, Dale Earnhardt Jr.’s had a front left go down, putting him into the wall for some minor right side damage. Earnhardt made it back up to the top 10 but eventually fell back to finish 12th.

Jimmie Johnson and Brad Keselowski both had tyres let go in the final stages of the race. Amongst others to hit tyre issues were Carl Edwards and Australia’s Marcos Ambrose. Ambrose was just outside the top-15 with 10 laps to run when he had to make another stop to change tyres and lost the lead lap in the process finishing back in 30th.

Only minutes before the start of the race, Joe Gibbs Racing officials announced that driver Denny Hamlin was not medically cleared to race because of a sinus infection that is causing vision problems. Sam Hornish Jr. drove the No. 11 FedEx Toyota in his place and finished 17th.