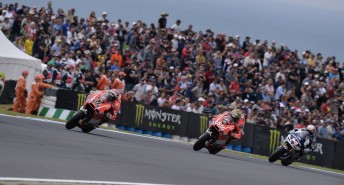 Network Ten will proceed with full qualifying and race coverage of Moto3, Moto2 and MotoGP at Phillip Island despite last minute deal for Fox to show all classes live this year

Network Ten will retain full coverage of the Australian Motorcycle Grand Prix later this year in the wake of a last minute deal for all MotoGP categories to be shown on Fox Sports.

Under new arrangements struck shortly before the season opened at Qatar, Fox announced it would broadcast all Moto2, Moto3 and MotoGP practice, qualifying and races live in 2014.

It leaves Ten with live coverage of just MotoGP however the Network confirmed it will show full qualifying and races of the three categories at Phillip Island, round 16 of the world championship, from October 17-19.

Details of the split arrangement which has given the bulk of MotoGP coverage to the subscription channel were not finalised until the 11th hour.

New arrangements regarding the sub licensing of the motorcycle classes for 2014 coverage were struck even though Network Ten is in the final year of its contract with MotoGP management.

“Every MotoGP race in 2014 will continue to be broadcast live, free and in High Definition on ONE,” a Network Ten spokesperson said.

“The Australian round of the MotoGP Championship, including Moto3, Moto2, qualifying and the race, held at Phillip Island, will still be broadcast on TEN.

“In addition, ONE will feature a pre-race and post-race MotoGP show.

“Hosted by Greg Rust and expert commentator Daryl Beattie, the pre-race show which will provide a detailed review and expert analysis from the qualifying race as well as a comprehensive preview of the race.

“A thorough post-race review and analysis will also be provided at the end of all 18 races, which cover 13 countries and four continents.

“Every MotoGP race, including the pre-race and post-race shows, will continue to be available via live streaming at www.tenplay.com.au.”

With the support events moving across to Fox for all non-Australian events, Network Ten could only run highlights in the lead up to its live MotoGP coverage in the early hours of the morning.

Network Ten takes over the V8 Supercars broadcast rights contract from next year under a fresh six-year shared deal between the free-to-air broadcaster and Fox and Fox Sports.

That deal means only Adelaide, Townsville, Sandown, Bathurst, Gold Coast and Sydney V8 events will be shown on free-to-air with one-hour highlights shows of the remaining events to be screened on One HD at 8.30pm (11.30pm on Ten) on the nights of those other race meetings.

It will mean that from 2015, Fox will have every major motor racing category globally with the exception of Formula 1.

Next Story Penske to make V8 decision after Indy 500