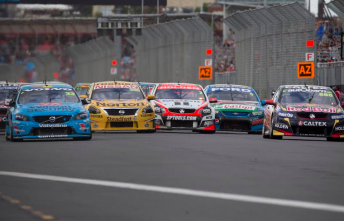 Gow, who manages V8 Supercars star James Courtney, is a long-time promoter of the British Touring Car Championship as well as heading up the FIA’s Touring Car Commission.

V8 Supercars CEO James Warburton announced in Adelaide earlier this month that the Australian championship aims to add a further three international events to its schedule over the coming years.

The category hopes to have two events in the United States next season and says it’s also in discussions with a further five countries about hosting races.

Despite fanfare over gaining FIA international series status under Martin Whittaker’s leadership in 2011, the championship currently boasts no races outside Australasia.

Gow, meanwhile, has impressively rebuilt the British Touring Car Championship over the last decade since returning to its helm.

In 2014 the BTCC boasts a 31 grid, featuring 11 different marques and a license entry system for the first time.

Focussing on the local market has been a cornerstone of Gow’s approach to the BTCC, and, according to the ex-pat Australian, should likewise be the priority for V8 Supercars.

“I’ve yet to see a domestic championship of anything successfully become an international championship,” Gow told Speedcafe.com.

“You’ve got to understand where your place is in the world. If we took the BTCC to Saudi Arabia it wouldn’t be very popular either. You don’t want to ever lose the home ground support that you’ve got for it.

“Around the Asia-Pacific reason is fine (for V8 Supercars). New Zealand is a natural location, as well as other places in Asia, but time and time again people have tried this (international expansion) and it doesn’t work.

“You’ve seen the demonstration of that when you (V8 Supercars) have gone overseas and three men and a dog have turned up, comparatively speaking.

“You’ve just got to be careful that you don’t ignore your home ground support.”

Gow added that the prospect of taking the BTCC outside of Britain would be little more than “a vanity exercise”.

“We were offered to go and do Dubai years ago and a couple of other places as well, but we elected not to do it,” he revealed.

“We were asked to do Macau a few years ago before the WTCC started going there, but we just wouldn’t do it.

“Taking it outside Britain is a vanity exercise for the drivers who’d like to drive their car at Spa or wherever.

“There’s no upside for us, apart from getting a bit of a cheque from the promoter. Who wins out of it?

“And increasingly, other national championships aren’t doing it. NASCAR realised it, the DTM realised. They are good, domestic championships.

“If they (V8 Supercars) want to expand a bit more then good on them, but you’ve just got to be careful what you wish for.”

The collective financial health of the V8 Supercars paddock has proven a particular concern over the last 18 months as the cost of the Car of the Future changeover coincided with a decline in television revenues.

Although still providing high-quality, competitive racing, the situation has seen the field decline by three to 25 cars this year.

“It’ll always get down to costs,” added Gow of the challenges at hand for V8 Supercars and its teams.

“As long as you keep the costs under control for what you’re delivering then you’ll be fine.

“The size of the wheel nuts and so on is immaterial. Don’t sweat the small stuff. It’s the big stuff you’ve got to look at and that is cost.”

Introduced in 2011, the BTCC’s ‘Next Generation’ cars are similar in concept to V8 Supercars’ Car of the Future, with road car body panels fitting over a control chassis.

Unlike the Australian championship, the majority of the field carries a ‘generic’ TOCA engine package.

Also helping control costs, a higher percentage of each car in Britain is of control specification, including the entire front suspension.

The Team Dynamics-run Honda and Triple Eight MG efforts are the only factory teams currently in the BTCC, while V8 Supercars boasts four manufacturers following the addition of Nissan and Volvo over the last two seasons.