Red Bull under no illusions over form

Red Bull under no illusions over form 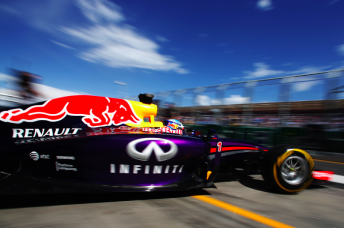 Red Bull team principal Christian Horner has ruled out beating Mercedes in a straight fight at Sepang next weekend, despite his team’s resurgence in Australia.

The four-time reigning championship winning squad headed to Albert Park as outsiders after a troubled pre-season of testing.

Local hero however Daniel Ricciardo scored outstanding second place results in both qualifying and the race before being disqualified for a technical infringement.

Although there was much relief among the team over the new-found reliability and speed of its RB10 package, Ricciardo took the flag a full 25s behind race winner Nico Rosberg.

“The gap is significant,” said Horner.

“The Mercedes is definitely extremely quick and I should think they were driving to a pace (in the AGP) rather than being stretched.

“They’ve probably got more up their sleeve so we’ve got quite a lot of work to do.

“What was encouraging is that compared to the rest of the field, we exceeded our expectations.

“To be racing McLarens and Ferraris and beating them, after the pre-season that we had… by the 20th lap we were into new territory in terms of distance completed by the car.”

He added when asked if the Red Bull can challenge for victory in Malaysia: “No. I think they controlled the race (in Australia).

“I’m sure they didn’t fully extend themselves and it looks like they have at least a second in the pocket here at the moment.

“You could see also that Williams looked very quick. I think that if they’d had a clean race they would have been right there.”

Although Ricciardo’s car ran largely without fault throughout the weekend, power unit issues took Sebastian Vettel out of contention in both qualifying and the race.

Problems with Renault’s engine package had been the talk of the pre-season and, while the engines have now been homologated for the season, Horner says his team will conitnue to work closely with the French manufacturer.

“Ninety percent of the issues are software related; how the energy recovery system is working with the combustion engine,” he said of whether Renault can still hope the team make up ground.

“So there’s a lot of scope (for improvement in straightline performance).

“We’re tremendously restricted with the driveability of the car, how the torque is delivered, which obviously effects straightline speed.

“I think there is room for an awful lot of improvement, but it’s working between the engineers in Milton Keynes and Viry-Chatillon (Renault engine plant) to make sure we get the most out of it.”

Ricciardo, whose disqualification from the AGP will be the subject of an April 14 appeal hearing, echoed Horner’s thoughts on the team’s current position in the pack.

“At the moment, we’re in the battle to be the second-best team,” he said.

“Obviously that isn’t where we want to be but it’s exceeding our expectations of only a few weeks ago.

“I think once we really get into the setup of the car, we’ll be able to close the gap to Mercedes.

“Obviously they’re going to improve too but I think we’re in a good position to make bigger strides.”