Murphy dominates V8ST round at Pukekohe 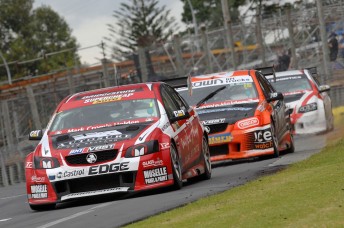 Greg Murphy has stormed to a commanding lead in the BNT V8 SuperTourer Championship after taking two wins from three races at Pukekohe.

Murphy grabbed wins in the opening race and the final feature race at the TR Group 250 round with the Holden ace now claiming eight wins from the nine races conducted from the three rounds this year.

Angus Fogg was first over the line in the middle race then was handed a 10-sec time penalty for following a chaotic rolling start, which saw polesitter Ant Pedersen drop to fourth as cars ran four wide down the front straight.

Pedersen was briefly declared the winner before the positions were reversed to the initial finishing position with Fogg beating Pedersen while Murphy was third.

In the final feature event, Murphy survived a concerted attack from Queensland’s Morgan Haber who finished second while Richard Moore took third in the 34-lap race.

Suffering damage to his Commodore, Murphy managed to stave off the attack in his M3-prepared Holden.

“It (the car) was really bad over the hill and at turn one but I decided to keep going,” Murphy said.

“It was probably a broken shock absorber. We certainly didn’t have the fastest car.”

Young Haber and Aucklander Moore, who also drive Holdens out of the same M3 stable, closed on Murphy with Haber hounding the four-times Bathurst 1000 for several laps before the chequered flag appeared.

“That’s my best result in a high-level category,” Haber said.

“I had a few cracks at Murph but he’s smarter than me and he held me out.”

Pedersen speared to a big lead in the feature race, pushing hard on a damp track.

But as the track dried he and several other drivers pitted for slick tyres which proved his undoing, as the speed advantage was not enough to make up for the time lost in the pits.

Murphy now leads the seven-round championship by 159 points from Pedersen.

The fourth round, and final of the sprint series, returns Pukekohe, as part of the V8 Supercar meeting over the long Anzac weekend.

Next Story Podium for Winterbottom in Brazil