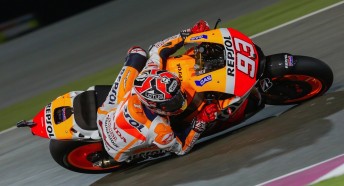 Marc Marquez on his way to pole

The Spaniard, who is still recovering from a broken leg, had struggled for pace in free practice, but the motorcycle sensation dug deep to produce a 1.54.507s lap time to deny Gresini Honda’s Alvaro Bautista from taking pole.

Forward Yamaha’s Aleix Espargaro went into the session as favourite to snare pole position after completing a clean sweep in practice.

However, the Spaniard suffered two falls in qualifying, one occurred while on a lap which would have secured pole. As a result, he will start from ninth on the grid.

After coming through Q1, Cal Crutchlow posted the eighth fastest time as he prepares for his first Grand Prix as a works Ducati rider.

In Moto3, Queensland’s Jack Miller will start from third on the gird after just missing out on pole by two tenths of second.

”The qualifying session went really well, but I think it could have been better, because during my final laps I was faced with a lot of traffic,” said Miller.

“With new tyres the bike was fine and I could do consistent lap times without a slipstream. I’ve not been able to lower my lap more, but I was always riding alone and this will help us in the race.”