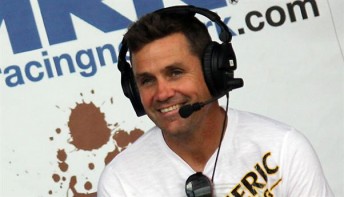 Sydney-sider Kerry Madsen has moved to fourth in the World of Outlaws STP Sprintcar Series after an epic win, passing multiple Champion, Donny Schatz on the final lap to record his first Outlaws win of 2014 at Stockton in California.

Just a tenth of a second separated the pair – Madsen – in the Australian owned Keneric Racing machine coming on strong at the back end of the race. Third placed was Joey Saldana, who led the most laps of the race.

After leading the early stages, Schatz challenged Saldana as the laps were winding down, taking a number of looks at the lead. With two laps remaining, Schatz charged to the bottom of turn one get himself back to the front.

After running third for most of the race, Madsen followed Schatz into second with one lap remaining. On the final lap, Madsen put his American Racing Custom Wheels car on the tail of Schatz’s STP/Armor All machine.

Lapped traffic would play its part as the pair entered the final brace of turns. Madsen went to the bottom as Schatz was caught with the lappers. It generated a drag race to the finish which fell the way of the ecstatic Australian.

“That was actually really exciting because Donny and Joey were just battling and I’m like I think I’ve got a shot here,'” said Madsen. “It was one of those races where I think it paid to be behind the leader, because I found that line and I just got patient with it. I’m just rattled that we won that, I just did not expect that, that’s cool.”

Madsen had been quick all night long, setting second quickest time in qualifying.

He now sits fourth on points in the overall STP World of Outlaws points chase, a mere 21 points from current leader, Paul McMahan.