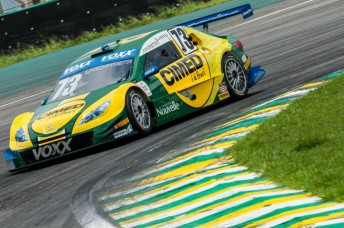 Mark Winterbottom will start from seventh position on his debut in the Brazilian Stock Car series at the Interlagos Circuit in São Paulo, while FPR stable mate Dean Canto will start 16th.

33 cars have entered the two-driver race event with the V8 Supercar duo joining a range of drivers with F1, DTM, Sportscar and Indycar experience.

Winterbottom will share a Peugeot 408-bodied car with local driver Sergio Jimenez, while Canto will team-up with former V8 driver Max Wilson in a Chevrolet Cruze. 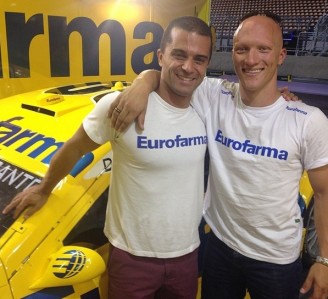 Wilson and Canto back together for the first time since 2002

The team gave Winterbottom the first two practice sessions in the car before the last session was rained out for Jimenez. “Awesome to do some laps. The car is great fun to drive. Fast race pace on the used tyres,” said Winterbottom via Twitter.

This morning’s qualifying went strongly with Winterbottom saying, “I was P4 out of the internationals and Sergio was P10. They combine our times which puts us seventh for the race. Like our series the top-10 with combined times is covered by two tenths of a second. So close!

“Really talented drivers over here so tomorrow’s race will be interesting. Rules are that local driver starts and co driver finishes.”

Canto who is back in the same car with Wilson for the first time since 2002 said via Twitter “Different beast to drive but awesome cars and awesome track. Great to be driving with Max again, but this time on his home turf.”

This weekend’s race is the first time a two-driver format is being used and pole went to Caca Bueno and Pato Silva.

In the race each car will have 11 ‘Push to Pass’ power-up opportunities, plus a driver change must occur between laps 13-16, with 20 litres of fuel to be added and all four tyres changed.

Next Story Murphy dominates V8ST round at Pukekohe