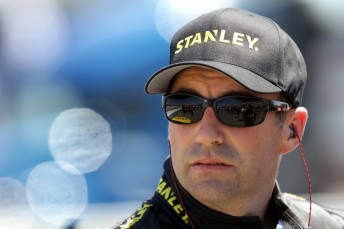 Team Penske has publicly declared its interest in hiring Marcos Ambrose if hopes to enter the V8 Supercars Championship come to fruition.

Speaking about the potential V8 Supercars effort for the first time since his fact finding mission at the Sydney 500 race last December, Penske president Tim Cindric, admitted Ambrose is on the North Carolina-based team’s radar.

After the exploratory trips by Cindric and team owner Roger Penske to Australia last year, one of the most successful squads in world motor racing remains eager to set up a team in V8s.

It is yet to make any firm decision on how it would go about such a move, which has been triggered by Penske’s purchase of the Western Star truck distributorship for Australasia.

In an interview with Speedcafe.com, Cindric said Penske playing a role in helping Ambrose return to Australian racing after the double V8 champion’s nine-year NASCAR career would be ‘intriguing’.

“I think that would certainly be intriguing to us and quite a few others,” said Cindric of Ambrose.

“But there’s a lot more to it than really a driver’s perspective.

“Would we be interested in that (Ambrose)? Yeah absolutely.

“We know Marcos and he knows us probably more so than the rest of the V8 paddock.

“It is something we would entertain if all the moons align.”

Ironically heightened interest in a possible return for Ambrose to the category where he won back-to-back championships in 2003-2004 comes hot on the heels of his best NASCAR result for 18 months.

Ambrose’s fortunes for Richard Petty Motorsports in NASCAR flagged in 2013, however he came off a fifth place at Bristol last weekend and is running a career high 15th in the Sprint Cup standings.