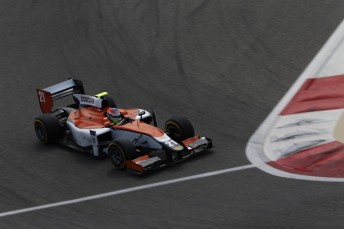 Briton’s Jon Lancaster ended the second round of GP2 pre-season testing on top at the Bahrain International Circuit.

Lancaster (MP Motorsport) banked a 1:39.647s best in the quicker morning session after logging only 15 laps.

He led the way narrowly from Alexander Rossi (EQ8 Caterham Racing) who clocked 1:39.693 while Carlin gun Felipe Nasr was third fastest in 1:39.829s.

Kiwi Mitch Evans was again mixing it in the top 10 times after posting a 1:40.233s best in the Russian Time machine to be ninth.

After a one-hour break, the afternoon session began with Daniel Abt (Hilmer Motorsport) turning the best lap in 1:41.061s.

Evans ended second best in 1:41.272s after completing 36 laps on the final day of the second successive round of testing in the Middle East after the Abu Dhabi runs recently.

Jolyon Palmer (DAMS) spent much of the three-hour session on top after settling for the fifth best time behind Rapax driver Adrian Quaife-Hobbs.

GP2 teams made the most of the closing session to concentrate on race simulations and pit stop practice.

The series will return to Bahrain for the opening round of the F1 feeder category from April 4-6.