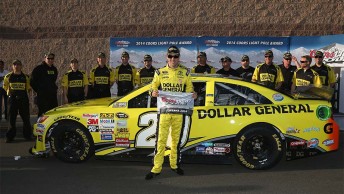 Kenseth with the pole award

Matt Kenseth has taken the Coors Light Pole Award at Auto Club Speedway in Fontana with Brad Keselowski keeping Penske’s hot form in qualifying going with the next quickest time. 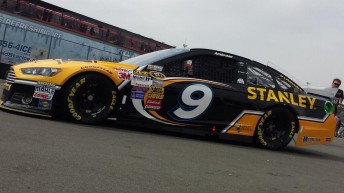 Australia’s Marcos Ambrose backed-up his fifth place in qualifying at Bristol last week with the eighth quickest time today. Ambrose went on to finish fifth in that race. It’s the Tasmanian’s third top-10 qualifying position in the five races contested after he started the Daytona 500 in seventh.

“It was a great day for us. This has been a tough track for RPM (Richard Petty Motorsports) the last couple years and had enough speed to get ourselves in the final 12 and put down another good lap,” said Ambrose.

“I am proud of the efforts for Stanley and Ford and everyone with the program. It has been a really good day.”

His focus is on NASCAR right now, but Ambrose has been mentioned as a target by Penske if they come into V8 Supercars in the future.

Denny Hamlin, who won the pole for last spring’s race at Auto Club, qualified 13th, just missing a chance to qualify in the last round.