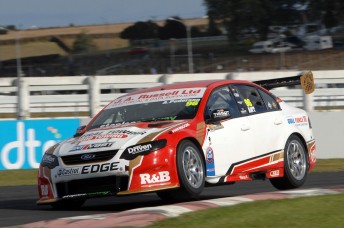 Ant Pedersen on the ragged edge in qualifying at Pukekohe. Pic: Euan Cameron

Hamilton accountant Ant Pedersen claimed pole position in both qualifying sessions for round three of the BNT V8 SuperTourer Championship at Pukekohe.

International Motorsport driver Pedersen soared to the prime starting berth in the opening qualifying session for the TR Group 250 with a 1:04.098s lap.

Slightly cooler temperatures saw Pedersen lower his time for the second qualifying session by setting a 1:03.931s lap, beating Murphy by .070s while Angus Fogg was third fastest in 1:04.255s.

The qualifying sessions set the grid for the opening two races of the three-race format tomorrow.

For Pedersen the double pole had special meaning after a family bereavement during the week.

“I thought the first qualifying was good and I thought if someone is going to beat it (the time) it was going to take some effort as I was just on the edge,” Pedersen said.

“We still had a green tyre that was coming on so I knew we could push – and knew what it was capable of.

“My pop died on Wednesday. He was a motor racing nut, super special to me.

“I had him on my mind – particularly during the in-lap – I thought about him a lot. So it was a pretty big moment for me.”

The opening two races are each decided over 18 laps while the final heat is over 34 tours.