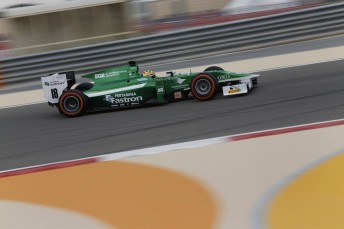 Indonesian driver Rio Haryanto claimed the quickest time as the pace quickened on a cooler day in GP2 pre-season testing at Bahrain.

Carlin driver Julian Leal was third fastest in the morning run in 1:30.538s.

The times would stand with the temperature climbing for the afternoon session which was topped by Daniel de Jong (MP Motorsport) who clocked 1:40.508s ahead of Trident’s Johnny Cecotto (1:40.779s) with Leal third again in 1:40.882.

Kiwi driver Mitch Evans was sixth fastest in the morning run in 1:39.870s, just head of Stoffel Vandoorne (ART Grand Prix) with the top seven the only ones to crack the 1:40 barrier.

The field of 26 GP2 runners will gear up for the final day of pre-season testing which will finish later tonight (Australian time).

Next Story Lancaster pounces on final day of GP2 testing