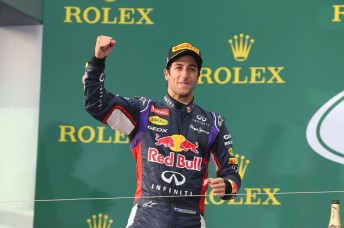 Daniel Ricciardo stood on the podium before his disqualification

The local driver was thrown-out of second place late on Sunday night after his car was found to have breached the maximum 100kg/h fuel flow regulations.

Team principal Christian Horner immediately signalled his squad’s intention to appeal following confirmation of the FIA Stewards’ decision, but had a 96 hour timeframe in which the documentation could be filed.

An FIA spokesman has confirmed to Autosport that the appeal was lodged just hours prior to the deadline.

Red Bull remains adamant that the FIA’s fuel flow calculations during the race were inaccurate.

A date for the hearing, which will be held at the FIA’s Court of Appeal in Paris, France, is expectted to be confirmed by the end of the week.