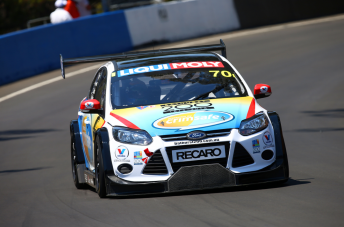 Ryan McLeod’s V8-powered MARC Focus endurance cars have been granted their own trophy in the Kerrick Sports Sedan Series.

Three of the Queensland-built cars made their racing debuts at February’s Bathurst 12 Hour ahead of an overseas endurance racing schedule.

McLeod hopes to have more of the Ford Coyote-powered machines built and running in the domestic class by the second half of the year.

The part-time driver says that the ‘turn-key’ MARC package will provide an easier way for competitors to enter the Sports Sedan Series, which struggled for entry numbers last year.

“With these cars we have sought to address a lot of the issues of ‘traditional’ Sports Sedans such as short engine life, difficulty sourcing parts due to the fact that most are at least slightly bespoke in nature, and the temperamental nature which often calls for drivers to all have access to design, fabrication and engineering skills to be competitive,” he said.

“With the product we are offering racers can turn up, unload the car from the trailer and race effectively in an exciting racing series nationwide and even compete with fellow racers in prestigious events such as the Bathurst 12 Hour, the Sepang 12 hour or Barcelona 24 hour – all with the same car.”

The Focus V8s will be eligible for both outright and class points in the series, which kicks-off at Mallala’s Shannons Nationals meeting in late April.

“The MARC Focus machines will bring something different to the Kerrick Sports Sedan line-up which is exciting for everyone,” added series director Rob Curkpatrick.

“To be able to invite a car like this to our ranks and at the same time create somewhat of a category within a category is something we hope will help add some further spice to the Series.”