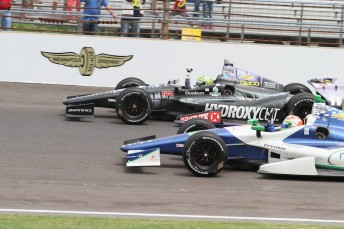 The Indianapolis 500 will be one of three 500-mile races that will carry double points as the category announces sweeping changes to its points and penalty systems for 2014.

A move to offer double points for the Indy 500, Pocono and Auto Club Speedway races are part of a substantial overhaul in the Verizon IndyCar Championship which starts at St Petersburg, Florida from March 28-30.

There will also be points on offer for the two Indy 500 qualifying days as well as bonuses for reaching the fast nine shootout.

Former long-time team owner Derrick Walker, who now heads up IndyCar’s competition and operations department, said the the amendments should add more spice to the championship.

“Adding more weight to the 500-mile events rewards teams and drivers that continually rise to the occasion at key times of the year,” Walker said.

“We looked at various ways to improve the way we decide our champions, and this will only make the championship battles more exciting.”

IndyCar has abolished the 10-grid spot penalties on drivers for premature engine changes in favour of harsher sanctions.

This has now been switched to a 10-point penalty placed on a manufacturer’s tally, while entrant initiated engine changes will result in the loss of 10 driver and entrant points.

Unapproved engine swaps will now result in cars starting from the rear of the grid in the next race however there will be no penalties for engine changes during the Indianapolis 500.

Any penalties carried into or earned at the Indy 500 will be served at the following race.

“Fans didn’t like like seeing drivers receive the 10-grid-spot penalty for engine changes, especially when it was out of the team’s control,” Walker said.

“With the help from our manufacturers, we are able to enhance our races without adding more confusion to the people who follow the sport.”

There will also be rewards in place with manufacturers standing to receive a 10-point bonus for each of their 2.2litre, twin turbo V6 engines that reach the 2500-mile change window.

Bonus points will be awarded to the manufacturer that leads the most laps (two points), leads at least one lap (one point) and earns the Verizon P1 Award (one point), with the exception of the Indianapolis 500.

Points will also be awarded to the top five in qualifying on May 17-18 at Indianapolis.