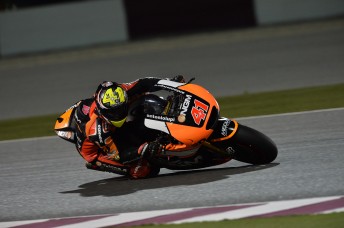 In the first Grand Prix practice session of the new ‘Open’ class era it was the NGM Forward Racing rider with his Open entry Forward with a 1’55.201 best lap, with Alvaro Baustista (GO&FUN Honda Gresini) and Bradley Smith (Monster Yamaha Tech3) second and third respectively.

Espargaro’s pace was over 0.3s slower than he went in testing here two weeks ago. The day was not without incident for him as he received a fine for speeding in the pit lane.

At the start of his second season in MotoGP Smith was third by a 0.6s margin, with Andrea Iannone (Pramac Racing) and rookie Pol Espargaro (Monster Yamaha Tech3) also in top five as the riders who tested in Qatar occupying the top end of the timesheet. The younger Espargaro brother appears to be riding smoothly despite his collarbone injury sustained ten days ago at this track. 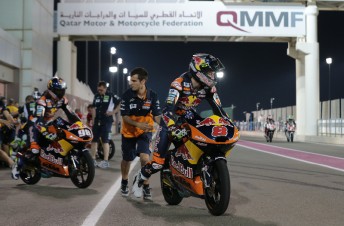 World Champion Marc Marquez (Repsol Honda Team) was 11th as he tested his fitness after breaking his right leg in preseason, whilst Yonny Hernandez (Energy T.I. Pramac Racing) finished 15th and went for a scan after walking away from a turn 16 crash which caused a brief red flag due to track debris.

Australia’s Broc Parkes was 22nd on the time sheets on his Paul Bird Motorsport machine.

”I’ve found good settings for the KTM. During the first session I did not feel comfortable, not with myself or with the bike, but in the second run we improved that,” said Miller.

“We still have work to do, but we also still have time. Undoubtedly it will be a very tough and difficult week, because there are many riders going fast, but I am confident that we can get better.”