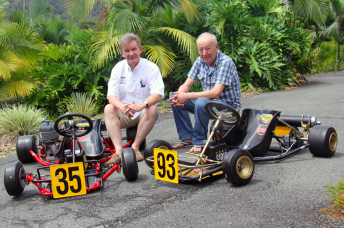 The man who mentored Ayrton Senna during his formative years in karting, Angelo Parrilla, is in Australia this week as one of the special guests for the KTEQ Rentals Australian Vintage Kart Prix in Ipswich.

This weekend’s inaugural event has attracted more than 200 karts, ranging from the early 1960s through to 1991, from various part of the globe – including the iconic kart that Senna drove in the 1979 World Championships.

The Italian, who turns 66 today, is looking forward to being reunited with some old friends throughout this weekend’s event.

He has already started the banter by sending a message to Australia’s most successful kart racer of all-time, John Pizarro, on one of his karts restored by Gold Coaster Graham Powles.

“I love Australia, the weather is fantastic and everyone involved in this weekend’s event has done an amazing job to have more than 200 vintage karts here,” said Parrilla.

“I’ve already left Mr Pizarro a note to remind him that he needed to go two one-hundreths of a second faster when he was driving in my team in Japan during 1982 at the Asia Pacific Championships.

“Graham (Powles) has restored some amazing machines and it has been an honour to spend some time on the Gold Coast with him.

“I’ve had a relationship with the Australian people since 1973, I dealt with gentlemen such as Les Power, Peter Dell, Drew Price, Dean Harrison, Allan Brown, John Pizarro and Ken Mitchell along with many others here.

“For many years we sold 250 to 300 frames and engines here in Australia each year, it was a very good market for us.”

Joining Parrilla as one of the special guests for this weekend’s event is Dutchman Harm Schuurman, who Parilla has previously noted as one of the top four drivers of his generation alongside Senna, Terry Fullerton and Mike Wilson.

In his last trip to Australia as a competitor in 1986 Haarman finished third in the International Castrol Grand Prix behind Alex Zanardi.

The karts of the KTEQ Rentals Australian Vintage Kart Prix will take to the Ipswich Kart Circuit from tomorrow (Friday) morning at 9am with the action continuing across the weekend.