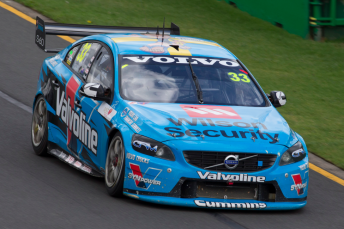 Polestar managing director Christian Dahl will head back to Sweden this week as his Gothenburg-based engine department focusses on shoring up the reliability of its rapid V8 Supercar package.

Dahl has been stationed in Australia for the last six weeks in order to oversee the debut of the Garry Rogers Motorsport-run Volvo S60s.

The cars have been the talk of the paddock across the opening two events, with Scott McLaughlin backing up a stunning second place finish on debut in Adelaide with a race and overall event victory at Albert Park.

With the 5.0 litre B8444S’s performance having proven competitive from the outset, Dahl’s four-man Polestar engine department is now largely focussed on improving reliability ahead of the endurance races.

While the engines have not suffered any major failures during their opening seven races, the increased vibration levels in the 60 degree bank angle units compared to the team’s previous Holden powerplants have brought an array of challenges.

“We have some work to do on the reliability of the engine,” Dahl told Speedcafe.com.

“The power is quite ok, but it has to last for a Bathurst also and I wouldn’t want to do that (a 1000km race) tomorrow.

“We have some time and some data now from the races to work with as well.

“I think there is quite a big challenge there for us, not just on the engine but on the complete car because the powertrain is new which affects the parts on the cars that was there last year.”

Although not commenting on the specifics of its performance, Dahl indicated that the team still has some room to move before the engine’s homologation reaches V8 Supercars’ power ceiling figure.

The S60s were consistently the fastest cars through the speed traps on debut in Adelaide; a fact thought to be closely related to its eyebrow-raising aerodynamic package.

“Everyone looks at top speed and turns it into horsepower, but it’s the speed you’re coming onto the straight with and everything,” said Dahl of the engine’s performance.

“We’re pushing as hard as we can to be as close as we can but, as Mercedes and Nissan proved last year, you can’t just build an engine and expect to be immediately up there.

“I think we had a bit of a gap to cover up but, of course, (it’s been) a really, really good start so far.”

Dahl’s relocation back to Sweden will be followed by that of Polestar engine department chief Mattias Evensson next month, leaving second driver Robert Dahlgren and a single Polestar mechanic as the only Swedes in the Australian team.

Dahl, who won’t be back in Australia “for a couple of months”, says that GRM’s own independent technical strength was a key factor in deciding to link with the team.

“When Volvo and Polestar started looking at the V8 Supercars Championship, we looked for the best possible team that we could from a technical perspective,” he said.

“Volvo has the image that they want to implement and everything but we really wanted to find the technically strongest team that we could be with.

“GRM have a few guys that are really, really good on the technical side, so we tried to take the best out of GRM and the best from Polestar.

“Putting that together was the mission for this season, and then hopefully next year really push for the championship.”

While matching reliability to the car’s current performance could well see Polestar make a championship tilt a year early, Dahl also has an eye on the bigger picture.

The V8 Supercars program has been implemented to kick-start Polestar’s push into the Australian performance road car market.

The first 50-strong batch of the $110,000 S60 Polestars were launched simultaneously with the road car last year, while the second-gen update was previewed in the week following Adelaide.

“It’s not as easy as they said in the 1960s in the US, race on Sunday, sell on Monday, but I think of course it will be a big impact for us to get these sort of results this early in the process,” he said of how the racing success is relating to the road car program.

“The commercial side of Volvo and Polestar have to make sure that we make the best use of it. Nothing is made by itself. You have to use the results to promote the program.

“It (V8 Supercars) is obviously very good (promotion) in Australia but it makes an impact in the rest of Europe and the world as well, especially Sweden.

“This gets more attention in Sweden than the Swedish championship at the moment, so it’s been really good for us.”

McLaughlin and Dahlgren are currently in Sweden on a meet-and-greet trip that will today see the Australian star visit the Volvo and Polestar factories for the first time.