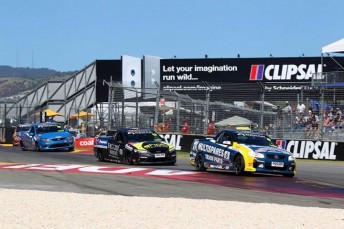 The V8 Utes field in Adelaide

A new control suspension package has levelled the playing field in the V8 Utes Series, according to its teams.

Although in different specifications to suit the Ford and the Holden, the Supashocks aren’t adjustable for the teams, taking away a potential area for advantage.

The new package made its race debut at the punishing Adelaide street circuit last month, where David Sieders took the round win.

Sieders Racing team manager Luke Sieders, whose team prepares four Fords and one Holden, has led the praise for the new units.

“The driver feedback has been pretty positive with the cars reaction on the kerbs and a lot of the drivers have said they have a lot more feel in the car overall,” he said.

Two-time defending V8 Ute Series winner Ryal Harris endured a shocking start to his campaign in Adelaide and sits just 12th in points heading to the second round.

Despite his tough run, Harris says the change has been a step forward for the category and will allow for harder racing on the street circuits.

“They’re better over kerbs and much more consistent so you don’t need to worry about losing performance throughout the race,” he said.

Adelaide’s event also indicated that V8 Ute lap records around the country are likely to be toppled this season.

Queenslander Kris Walton shaved 0.3s off the previous Adelaide Parklands circuit benchmark with his Ford at the Clipsal 500.

The V8 Ute Series will continue with the V8 Supercars Championship event at Barbagallo from May 16-18.