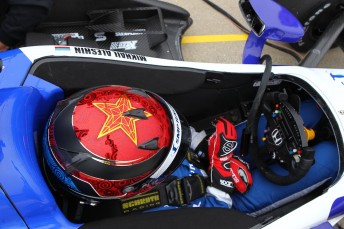 Improved driver side protection is at the centre of the latest upgrades to the control Dallara chassis for the Verizon IndyCar Series.

The DW12 chassis, named in honour of the late Dan Wheldon, gain carbon fibre panels that will supplement the existing Xylon anti-intrusion panels which the series claims will increase side impact protection by 60 percent.

A carbon fibre reinforcement ring has also been added to improve the structural integrity of the cockpit opening.

The upgrades, which add just over 4kg to the chassis, began in January through the Aerodine Composites Group in Indianapolis with all cars ordered to run the improvements for the Indy 500.

“Part of racing is always is an evolution,” IndyCar’s president of competition and operations, Derrick Walker said.

“The rules change and there are things you’ll do this year because you never saw them last year.”

Improvements to the headrest surround for road and street courses will reduce low G-force levels.

EPP (Expanded Polypropylene) foam which is used in molding driver seats will replace carbon panels on the outsides of a driver’s thighs.

Other developments are focussing on the development of a steering damper and that power steering has not been ruled out for future use.

The opening round of the 2014 series is scheduled for the 14-turn temporary street circuit at St. Petersburg, Florida, from March 28-30.