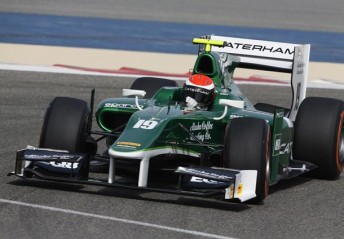 Alexander Rossi has claimed the quickest time on the opening day of the pre-season GP2 Series tests in Bahrain.

Following on from the recent three-day test at the Yas Marina circuit in Abu Dhabi, the Formula 1 feeder category saw Rossi (EQ8 Caterham) spear to the top in 1:40.604s in a frantic close to the session.

After Kiwi sensation Mitch Evans (Russian Time) went quickest and was the first driver to dip below the 1:41s bracket, Rossi assumed the top, just shading Daniel Abt (1:40.616s).