Ricciardo produced a strong performance on debut with Red Bull

Formula 1 legend Jackie Stewart is urging Australia to be patient with Daniel Ricciardo as he settles into his new front-runner status at Red Bull.

The three-time world champion was impressed by the 24-year-old Australian, who narrowly missed out on pole position before starring in Sunday’s Australian Grand Prix.

Although Ricciardo was disqualified from a stunning second place finish after his car breached the 100kg/h fuel flow limit, his Albert Park performance has been noted among F1’s elite.

However, Stewart believes Ricciardo’s supporters need to be patient before raising their expectations of him.

“It was a great performance from Daniel,” Stewart told Speedcafe.com.

“I hope Australia gives him a chance to get into the team and get organised as things don’t happen in five minutes.

“It was almost too good too soon. 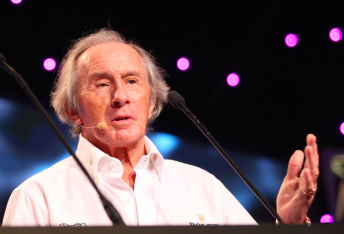 “He is a very nice boy and he drives really well but there is a long way to go and he needs time to fully develop all his skills.”

Five-time grand prix winner John Watson echoed Stewart’s views on Ricciardo, although the former McLaren driver believes his impressive Red Bull debut will have got under the skin of team-mate Sebastian Vettel.

The four-time world champion was outpaced in all but one session by his new team mate at Albert Park.

“I think its a very positive start for Daniel and he has put down a marker.

“I think Red Bull must be delighted and Doctor Helmut Markko is over the moon. The only person who is probably annoyed is Sebastian Vettel.

“Everyone in the team will think they have got a really great replacement for Mark Webber.

“Mark did a brilliant job for the team over the years but we have now got the new generation coming through.”

While his on-track performances confirmed he can compete with the best in the sport, Ricciardo believes he still has some way way to go to be a consistent contender.

“Obviously we still don’t have the pace of the Mercedes and we can make a lot of progress from here,” he said post-race on Sunday.

“I’ve got to continue this now but the team has to be pleased with what they’re seeing at the moment.”