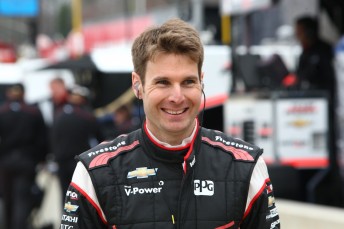 Will Power has led home a Team Penske trifecta on the opening day of the pre-season IndyCar test at Barber Motorsports Park.

Originally scheduled for seven hours of running, the test was cut by half owing to misty conditions at the Alabama circuit.

“We’ve had to try different things, so it’s a good day for that. Obviously the track conditions are exceptional, a lot of grip because it’s so cold, you gain a little bit of downforce.,” Power said.

“You’re always learning, there’s no use in belting around there not learning anything.”

With the Penske trio incredibly close, the next best was reigning series champion Scott Dixon (Chip Ganassi) who clocked 1:07.822s.

Montoya is returning to the American open-wheel scene where he made a big splash by winning the 1999 CART Championship for Chip Ganassi and the 2000 Indy 500.

“I’m trying to learn how to get more out of the car and we’re getting there,” Montoya told IndyCar.com

“It was good today, but there’s a couple of places that I need to do a little better job and be a little cleaner, but we’re getting there.”

The pre-season testing ahead of the opening round at St Petersburg on March 30 continues tomorrow.