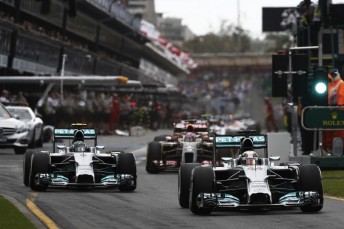 Albert Park winner Nico Rosberg says his Mercedes team still has plenty of work to do to improve reliability ahead of the Malaysian Grand Prix.

While Rosberg produced a commanding drive to win Sunday’s Australian Grand Prix by almost half a minute, his team-mate Lewis Hamilton was forced to retire after three laps with an engine issue.

Hamilton’s W05 dropped a cylinder in the early stages of the race which was a problem the Mercedes squad were aware of before the start.

Although performances at Albert Park confirmed the Mercedes is the fastest car in the paddock by some margin, Hamilton’s engine issue highlighted the fragility of the W05.

Rosberg admitted after the race that the team is concerned by reliability issues and will be working hard before the F1 circus heads to Malaysia in just under two weeks time.

“I’m not sure what happened to the other car (Hamilton) but for sure it’s a fact that we’re not 100 per cent sorted yet,” said Rosberg.

“We know that and the team did a great job to get my car working so well in the race but there’s still work to be done.

“We have two weeks now.

“We need to identify all the things that we can still do better because even leading up to this weekend, there were still a lot of changes on the car and you don’t really want to be doing that just going to the first race.

“And also in testing there were still a couple of problems at the end there, so great job, but still things to get sorted.”

Courtesy of his Albert Park victory, Rosberg leads the world championship from McLaren rookie Kevin Magnussen ahead of the Malaysian Grand Prix, held at Sepang International circuit from March 28-30.