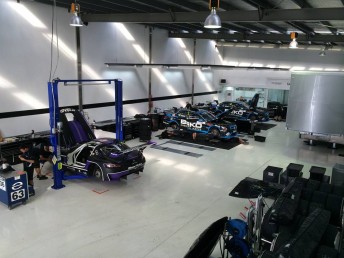 Erebus Motorsport’s V8 Supercars are this week being prepared from the team’s Melbourne GT workshop as part of a month-long stint on the road for the E63 AMGs.

The team’s Morrabbin base is regularly used to house Erebus’ SLS Australian GT entry and has not previously hosted its V8 Supercars.

Both the V8s and GTs need to be ready for action on the March 29-31 weekend, with the E63s racing at Symmons Plains in Tasmania and the SLS at Sandown in Melbourne.

The GT car, to be driven this season by Richard Muscat, is today at Phillip Island undertaking a pre-Sandown test.

“We need to have the two cars (V8 Supercars) at the wharf in Melbourne on Sunday to head to Tasmania, so keeping the cars there was the best option,” Erebus general manager Ross Stone told Speedcafe.com.

“They both came through the weekend relatively clean so we’re hoping we’ll be able to finish our preparation and fly the crew back home (to Queensland) on Thursday before they go to Tassie.”

The Symmons Plains meeting is the first of back-to-back V8 Supercars events that will then see the championship at Winton, Victoria, the following weekend.

The Queensland-based teams are all expected to prepare for the latter event at the Winton circuit itself, ensuring Erebus’ cars will complete three consecutive events without returning home. 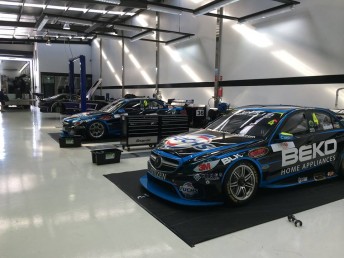 Both cars will run with Beko branding at Symmons Plains

Stone, meanwhile, is back at Erebus’ Queensland base leading the workshop crew’s continued development program.

Assisted by late-race attrition, the result marked the first time that Erebus has had two cars finish in the top 10.

The result boosted Davison and Holdsworth to eighth and 13th in the weekend’s event standings.

Holdsworth’s run had been hampered by tagging the wall in qualifying, while Davison was also forced to fight through from the back after a puncture on Saturday.

In other Erebus news, both cars will run in the branding of home appliance manufacturer Beko at Symmons Plains.

The Turkish brand moved onto the doors of Holdsworth’s car midway through the Albert Park weekend after the #4 entry had supported The Children’s Hospital at Westmead through the early part of the season.

The team continues to work on permanent primary backing for both entries.