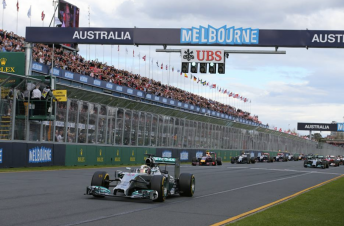 The furore over the quieter, duller exhaust notes from the new-for-2014 F1 cars has triggered unrest at official levels.

According to reports in Fairfax media, Melbourne Grand Prix chairman Ron Walker has already voiced displeasure to the sport’s ringmaster Bernie Ecclestone who remained in the United Kingdom for the season-opening race at Albert Park.

There is discontent within the Australian Grand Prix corporation with concerns that the F1 troops did not deliver on the terms of their contract.

Those within the sport, paying spectators and television viewers universally castigated the sound of the new cars.

Speedcafe.com did its own sound comparison at the weekend, highlighting the unrest among fans, many of whom, said the move away from the high-pitched screaming V8 engine was a step backwards.

“One aspect of it was just a little bit duller than it’s ever been before and that’s part of the mix and the chemistry that they’re going to have to get right,” AGP chief executive Andrew Westacott said.

“Ron spoke to (Ecclestone) after the race and said the fans don’t like it in the venue.

“We pay for a product, we’ve got contracts in place, we are looking at those very, very seriously because we reckon there has probably been some breaches.”