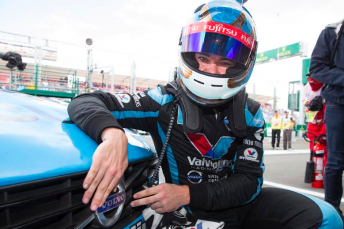 The 20-year-old will meet with Polestar and Volvo personnel on the trip, as well as taking in the Gothenburg facilities in which the V8 Supercars engines are built.

McLaughlin is being joined by team-mate Robert Dahlgren, who has moved to Australia this year following a 10-year career with Polestar in Sweden.

“We’re going to visit Volvo and see where our engines are built and so on,” McLaughlin told Speedcafe.com.

“We’ll have a few meetings with regards to engineering stuff, but it’s more just to meet everyone and have a look around.

“Robert is going to show me around his home town and take a few videos for the media over there. It’s going to be great”

The introduction of Volvo and Dahlgren has greatly increased the awareness of V8 Supercars in Sweden.

The Australian championship is said to be receiving more local media coverage than the Scandinavian series thanks to the team’s strong early results.

Although he has made all the headlines, McLaughlin expects to be playing second fiddle to Dahlgren when it comes to the Swedish media and public.

“It’ll be interesting, but I think Robert will get recognised more than me,” he said.

“It’s just really cool to be part of a championship that’s all over the world now.

“Being able to do this stuff as a factory Volvo driver is pretty sick.”

The New Zealander will likely have to explain to the Swedes his “gave it some jandal” tagline that shot to prominence in a post-race television interview at the Clipsal 500 earlier this month.

The Australian Volvo team has embraced the slogan since Adelaide, albeit without the impromptu “f*** yeah” finish to the interview.

The team ran a jandal cartoon over the top of the Swedish flag that adorns the roof of the #33 S60 at Albert Park.

It has also begun offering t-shirts featuring the “pluck it into first and give it some jandal” phrase.

“I’m not going to change. I said that to them (the Australian Volvo chiefs). I’m natural, I am who I am and I don’t want to change.

“They were good about it and now I’m really looking forward to going and meeting all the Swedish guys as well.”