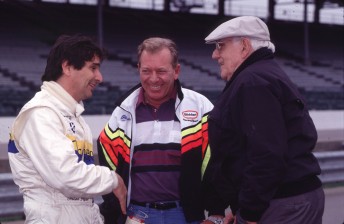 Born into a racing family, Gary was one of three sons sired by Indy 500 and sprint car racer Tony Bettenhausen.

His career started behind the wheel of a midget car before he progressed to sprint cars where he won numerous championships.

He would also prove a dab hand at the controls of IndyCars, starting 21 times in the famed Indy 500, achieving a best place third in 1980 and leading for 138 of the 200 laps before his car failed in the closing stages of the iconic race in 1972.

The youngest of the siblings, Tony Bettenhausen jr was a former driver and CART/Champ Car team owner who died in a plane crash in 2000.

While Merle Bettenhausen, who was born just under two years after Gary, suffered a tragically premature end to his IndyCar career, losing his arm in a crash three laps into his maiden USAC IndyCar race at Michigan in 1972.

The patriarch of the family Tony Bettenhausen snr was killed during a testing accident at Indianapolis in 1961.

Tributes have begun pouring in from the American dirt track and IndyCar fraternities.