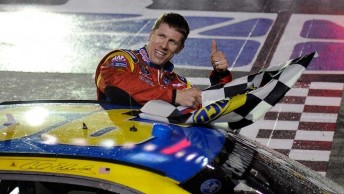 Edwards all smiles at Bristol

Carl Edwards has won the Food City 500 at Bristol as Ford took four of the top five results, including the best finish for Marcos Ambrose since 2012.

Outlasting not only the rest of the field but also a weather delay prior to the race and also a lengthy stoppage at lap #124. Edwards led home Roush team-mate Ricky Stenhouse Jr., Aric Almirola, Tony Stewart and Ambrose.

Edwards gambled on late-race pit strategy and held on to win at the ‘World’s Fastest Half Mile.’ Edwards became the fourth different winner in as many races this season, as he won his third Bristol Sprint Cup race and the 22nd of his career. 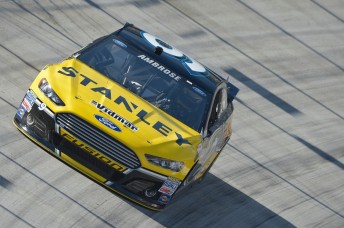 The two lengthy rain periods delayed the proceedings by nearly six hours. There was plenty of drama and mayhem during the long day and night.

Six-time and defending series champion Jimmie Johnson blew his right-front tyre on lap #114 of 500 and lost three laps. Matt Kenseth took a heavy hit from Timmy Hill as the field slowed for a spinning Cole Whitt. Kenseth rejoined in 30th, then went about chasing down the leaders and went to the front at lap #285.

Kevin Harvick took the lead, but on lap #450 he had an engine issue and slammed into the fence. Jamie McMurray got on the oil from Harvick and then was collected in the rear by Brad Keselowski.

It was during this period that Edwards, Almirola, Stenhouse, Stewart and Ambrose decided to stay out and the not take fresh tyres.

Stenhouse got by Almirola and then with less than three laps to run a malfunction with the track lights brought out another caution. It mattered little as the rain returned and the race finished behind the pace car.

“Jimmy Fennig (crew chief) made some calls. That’s a gutsy call with all the tyre trouble.

“It’s just an awesome night. We’re in the Chase and we’re gonna go win this championship. I just can’t believe we turned this thing around. We were terrible on Saturday, so I’m just glad we turned it around. Jimmy is the man.”

Ambrose had a true up and down race, starting fifth and then running around sixth place before slipping off the lead lap and down to 23rd with tyre issues. With new rubber and some adjustments Ambrose battled back onto the lead lap. Then a clever call with not stopping during the late caution period elevated him to fifth and he held that place through to the finish.

After going the entire 2013 season without a Top-5 finish, the result is a great performance for his crew as well as Richard Petty Motorsports team-mate Almirola.

“The groove went to the very fence and we had to really watch ourselves there and keep adjusting the car all night.

“We got a bad set of tyres where they delaminated and started to cord really bad, so we lost a lap and then got it back. I passed Kyle Busch to get the lucky dog and worked our way back up to the front.”